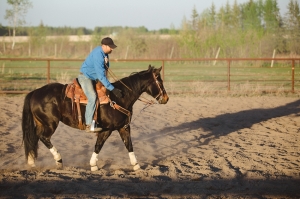 Our pride and joy.  He loves team roping, trail rides, ranch work and … eating.  He has been trained under the amazing Amanda Antifaev and Dustin Gonnet, he’s the boss man of the herd and no one misbehaves when Teddy is around.  We start all the colts with him as he is patient and teaches great habits.  Amara’s parents own his parents, so it has been really amazing to have such a stunner be home grown. 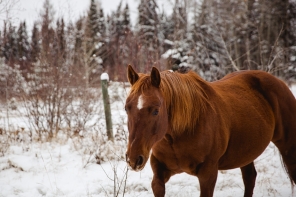 The reason for this business. This is Teddy’s full brother, and 13 years ago Amara’s mom sold him.  Three year ago, we acquired him, totally untrained (like never had a saddle on, never was caught), and very fat.  We were skeptical on what we had brought home but after one month of ground work, he seemed to grasp what we were asking and has been our go to trail horse for the last year.  Shawn has rode him miles bridle-less, kids and new riders are the first to be put on him … to say he has shocked us beyond belief is an understatement.  He is worth his weight in gold and we love him. 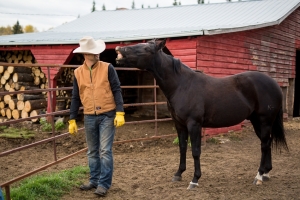 He is little, he is mighty, and he has a personality that is twice the size of him.  He loves to play, annoy every other horse in the pasture,  trail riding,  jumping and water.   He’s our child.  He has more enthusiasm than probably any other horse around here and has been spending some time in the roping pen learning the ways.  He will be the first to greet you, and if you’re wearing anything soft or fuzzy, he will probably start rubbing his nose on it. 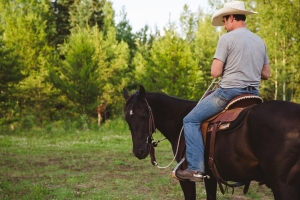 Spade has been with us since he was 6 months old and we can’t ever seem to get enough of him.  He takes everything in stride and is always willing to do exactly what is asked of him.  He’s our youngest boy, but definitely the oldest soul on the ranch.  He’s never in much of a hurry to get anywhere and continually steals the hearts of everyone who has had the pleasure of riding him. 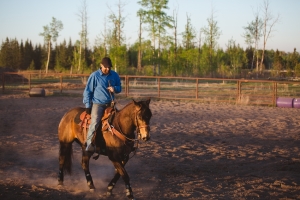 This is Fred’s full brother.  We love brothers around here!  Denny is quite possibly polar opposite personality wise of his brother.  He is bigger, he is softer, he is sensitive and he likes to please.  He is an absolute sweetheart and we love this guy.   This guy, along with Teddy and Fred, is in Shawn’s roping arsenal and you will see both of us on his back throughout the season leading the trail rides. 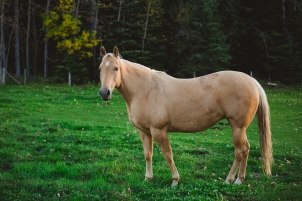 With only 60 days of riding on her in the past 9 years, we took a gamble with this show stopper.   She has quickly won Amara’s heart (when they win Amara’s heart, they are usually quiet and sweet), has had children ride on her back and has been rented out for a wedding – this girl knows when the camera is around.  We are so excited to have her and you will be sure to see her on the trails. 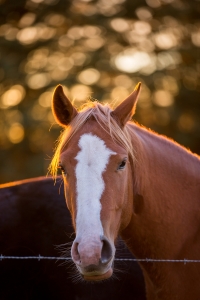 If you are so lucky to ever meet this classy lady, you will know why we love her.  Amara received a message 6 years ago (from the same people who owned Major!), asking if she would like to take her off their hands.  After stating just a week before to Shawn that there were going to be NO MORE HORSES … she begged Shawn to have her.   She is kind, she is beyond sweet, she is intelligent and brave.  She gives every ounce of her being to be good.  She does NOT like to get in trouble, ever.   She is our Ya Ha Tinda princess (trail riding is her jam!), crossing rivers, climbing mountains and leading the pack with zero hesitation.  She is a social butterfly and loves everyone. 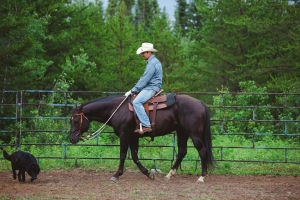 We are so excited to add this guy to our 2019 program as he has been slowly integrated into the business this summer.  He came to us at random  – which we feel is always our story with animals!   Shawn loves his browns with two white feet, and with a terrible photo on kijiji, we went on a ‘date’ to go check him out.  It was a no brainer – he was coming home with us.  He loves Shawn,  his friends, and being on the trail.  We are so happy to give him a job and a home where he gets many, MANY pets per day! 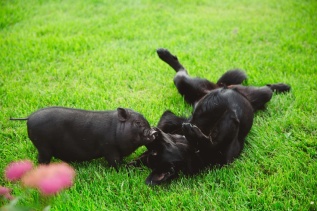 Although they are NOT horses, they are a part of this large family at Leaning Tree.  They are the greeting committee, and they are the best of friends.  Penny has been managing this place for the last six years and is the sweetest, most hard working pup around.   She likes to chat, enjoys her truck rides and sleeping by the fire in our porch on cold winter nights.

Lenny the potbelly, joined us in the summer of 2017 (who is MUCH larger now than in this photo). He came home at the very same moment as Duke did.   He is won over immediately with bread or any tasty treat you will offer him, he loves belly rubs and Penny.  You will often hear him around the yard and has taken a stance against too many horses and people in his barn at one time.  He’s VERY vocal!!

If you love chickens (or strongly dislike them ..), they are running freely around our yard!  We are offering farm fresh eggs this summer!!!